It was another busy weekend, as the event Women March Forward happened on March 25. This was the official follow-up to the solidarity sister march on January 21, where over 4000 people came out to the Legislature to declare that women’s rights are human rights. We wanted to do a “human library” instead of an event of speeches, and bring out organizations that deal with various aspects of women’s concerns as identified in a survey we did following the march. We had two keynote speakers who co-presented on the topic of intersectionality. I did an interview with Global Television about the event. I also did an interview with Metro.

The next day I presented my film McCauley: A Caring Community – Conversations on Social Housing as part of an after-service program at McDougall United Church. I appreciated their kind words in their program. 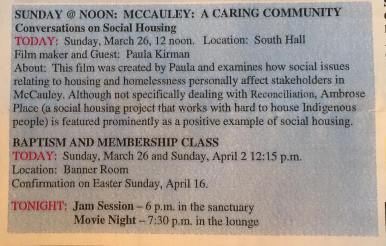 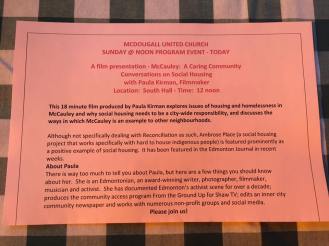